Our Family | Our Testimonies | Our Beliefs | Our Church | Our Mission

"Where each lives for the other and all live for God." 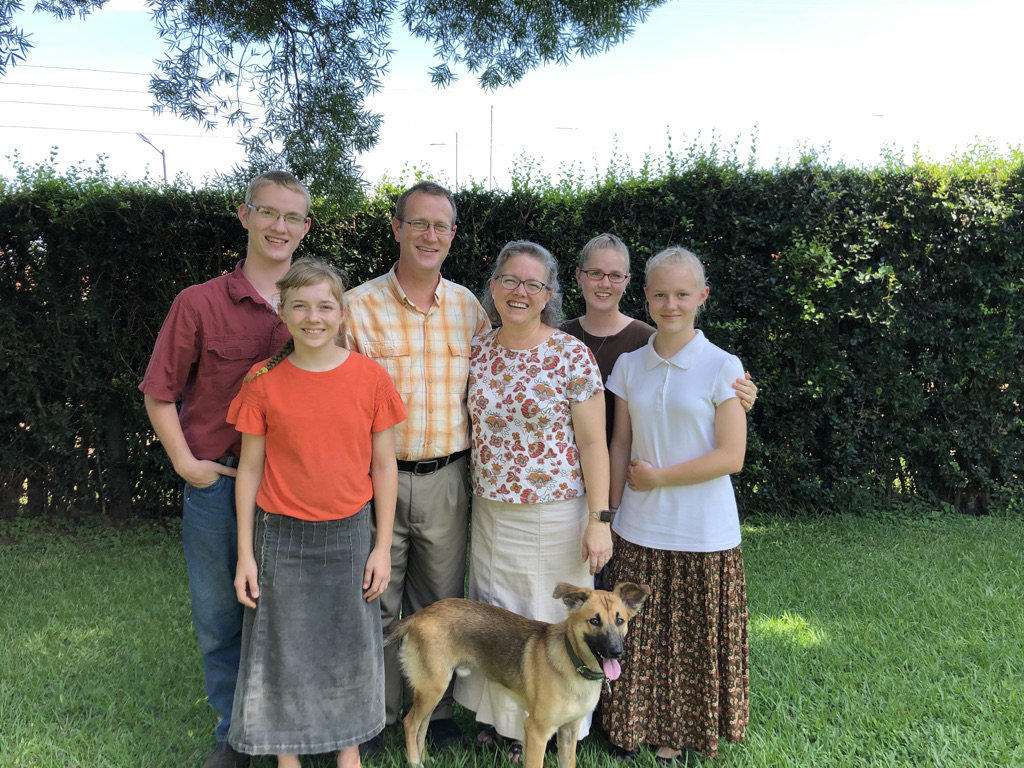 I was saved when I was seven years old.  My parents were missionaries in the country of Spain and so I knew many things from the Bible.  But I realized that I could not go to Heaven just because my parents were saved.  I could not get to Heaven on my parent’s faith.  I realized that I was a sinner who deserved to go to Hell.  Oh, I had never killed anyone, but I was still a sinner.  I also realized that I could not save myself.  My parents could not save me.  I was going to Hell. But I knew that Jesus loved me and died for my sins.  He paid the wages of my sin, which was His death and shed blood.  And all that I must do was to turn from my sins and turn to God, accepting what Jesus did for me on the cross. On July 23, 1981, I accepted Jesus as my personal Saviour. If you will accept Jesus and what He did for you on the cross, then you also can be saved. I was soon baptized and surrendered my life to do whatever the Lord wanted me to do, but as yet I did not know what He wanted me to do.  I graduated from high school and went to Oklahoma Baptist College. It was during my senior year there that I knew the Lord was leading me to be a missionary to Uganda, E. Africa. It was in college that I met Keila.  After we were married in 1996, we started deputation and finally arrived in Uganda in January 1999. We have been happily serving the Lord there since.  God has blessed us with five wonderful children of whom four are still with us - Marcus, Kendra, Kirsten and Kimberly.

I followed my father down the church aisle and made a profession of faith soon after my family joined Windsor Hills Baptist Church in Oklahoma City, Oklahoma in the spring of 1981.  I trusted that profession as my salvation until March of 1989. It was then that I realized my trust of salvation was solely in what other people told me and nothing that I remembered doing.  I then asked our associate pastor's wife to help me get things settled in my heart.  I am now certain that Jesus Christ is my Saviour without question or doubt! I attended Oklahoma Baptist College.  It was during this time in college that the Lord started dealing in my heart about serving Him full-time as a missionary.  During my junior year of college, the Lord brought Matt into my life.  We were married in July of 1996.  Matt and I started part-time deputation while I finished my last year of college and arrived in Uganda January 18, 1999.  Although life in Africa is different and many times difficult, I am honored to serve my Lord here with my husband and four children!  What wonderful peace God gives when we are in the center of His will!!

We believe in one triune God, eternally existing in three persons - Father, Son, and Holy Spirit - each co-eternal in being, co-identical in nature, co-equal in power and glory, and having the same attributes and perfections. (Deuteronomy 6:4; Matthew 28:19; 2 Corinthians 13:14; John 14:10,26)

The Person and Work of Christ Expand

We believe that the Lord Jesus Christ, the eternal Son of God, became man without ceasing to be God, having been begotten by the Holy Spirit and born of the virgin Mary in order that He might reveal God and redeem sinful men. (Isaiah 7:14; 9:6; Luke 1:35; John 1:1,2,14; 2Corinthians 5:19-21; Galatians 4:4,5; Philippians 2:5-8)  We believe that the Lord Jesus Christ accomplished our redemption through His death on the cross as a representative, vicarious, substitutionary sacrifice; and that our justification is made sure by His literal, physical resurrection from the dead. (Acts 2:18-36; Romans 3:24,25; 1Peter 2:24; Ephesians 1:7; 1Peter 1:3-5)  We believe that the Lord Jesus Christ ascended to Heaven and is now exalted at the right hand of God where, as our High Priest, He fulfills the ministries of Representative, Intercessor, and Advocate. (Acts 1:9,10; Hebrews 9:24; 7:25; Romans 8:34; 1John 2:1,2)

The Person and Work of the Holy Spirit Expand

We believe that the Holy Spirit is a Person Who convicts the world of sin, of righteousness, and of judgment; and that He is the supernatural Agent in regeneration, baptizing all believers into the body of Christ, indwelling and sealing them unto the day of redemption. (John 16:8-11; Romans 8:9; 1Corinthians 12:12-14; 2Corinthians 3:6; Ephesians 1:13,14)  We believe that He is the divine Teacher Who assists believers to understand and appropriate the Scriptures and that it is the privilege and duty of all the saved to be filled with the Spirit. (Ephesians 1:17,18; 5:18; 1John 2:20,27)  We believe that God is sovereign in the bestowal of spiritual gifts to every believer.  God uniquely uses evangelists, pastors, and teachers to equip believers in the assembly in order that they can do the work of the ministry. (Romans 12:3-8; 1Corinthians 12:4-11,28; Ephesians 4:7-12)  We believe that the sign gifts of the Holy Spirit, such as speaking in tongues and the gift of healing, were temporary.  We believe that speaking in tongues was never the common or necessary sign of the baptism or filling of the Holy Spirit and that ultimate deliverance of the body from sickness or death awaits the consummation of our salvation in the resurrection, though God frequently chooses to answer the prayers of believers for physical healing. (1Corinthians 1:22; 13:8; 14:21,22)

We believe in the verbal, plenary inspiration of the Holy Scriptures of the Old and New Testaments and that they compose the entire Word of God.  The Scriptures are inerrant, infallible, and God-breathed; and therefore, are the final authority for faith and life.  The sixty-six books of the Old and New Testaments are the complete and divine revelation of God to man.  The Scriptures should be interpreted according to their normal grammatical-historical meaning.  We believe that the King James Version of the Bible is the preserved Word of God for English-speaking people.

The Fallen Nature of Man Expand

We believe that salvation is the gift of God brought to man by grace and received by personal faith in the Lord Jesus Christ, Whose precious blood was shed on Calvary for the forgiveness of our sins (John 1:12; Ephesians 1:7; 2:8-10; 1Peter 1:18,19) We also believe that in order to be saved, sinners must be born again, that the new birth is a new creation in Christ Jesus, and that it is instantaneous and not a process.

The Eternal Security and Assurance of Believers Expand

The Return of Christ Expand

We believe in the bodily resurrection of all men - the saved to eternal life, and the unsaved to judgment and everlasting punishment. (Matthew 25:46; John 5:28,29; 11:25,26; Revelation 20:5,6,12,13)  We believe that the souls of the redeemed are at death absent from the body and present with the Lord, where in conscious bliss they await the first resurrection when spirit, soul, and body are reunited to be glorified forever with the Lord. (Luke 23:43; 2 Corinthians 5:8; Philippians 1:23; 3:21; 1Thessalonians 4:16,17; Revelation 20:4-6)  We believe that the souls of unbelievers remain after death in conscious punishment and torment until the second resurrection when, with soul and body reunited, they shall appear at the Great White Throne Judgment and shall be cast into the Lake of Fire, not to be annihilated, but to suffer everlasting conscious punishment and torment. (Matthew 25:41-46; Mark 9:43-48; Luke 16:19-26; 2Thessalonians 1:7-9; Jude 6,7; Revelation 20:11-15)

The Personality of Satan Expand

We have the privilege of having the greatest sending church, Calvary Baptist Church in Marshall, Missouri. It is a blessing to represent our church here in Uganda. Our pastor is Rodney Haggett, who together with his wife, Janeen, have done an excellent job leading our church in its various ministries.  We are excited about what the LORD is doing in our home church, the salvation of the lost and growth of believers, and look forward to what God has in store for our church in the future.